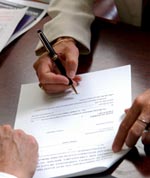 “Now both the IRS and state agencies across the country are redoubling efforts to uncover long-term “temps.” In February the IRS launched a three-year program that will examine 6,000 companies to find permanent workers misclassified as freelancers in violation of the Tax Code. President Obama’s proposed 2011 budget includes funding for 100 additional federal staffers to pursue such cases, and it would repeal a 32-year-old rule allowing companies in industries ranging from construction to health care to legally classify long-term employees as independent contractors. What’s more, a 2008 initiative linking the computer systems of various agencies makes it easier for the IRS and states to share data on how companies classify employees.”

Over the past 10 years the size of small businesses has decreases which can be interpreted as an indication that small businesses are using more freelances. Generally it makes economic sense to use freelances because overall it is a savings for the business, also it is easier to downsize a contractor verses an employee.

According to the Transactional Records Access Clearinghouse, a research center at Syracuse University:

“Over the past five years the agency has increased by 30% the hours spent auditing companies with less than $10 million in assets while decreasing by a third the time spent on large-company audits.”

If you are currently hiring independent contractors it is encouraged that you contact your accountant to make sure you are working within the terms of the tax law.